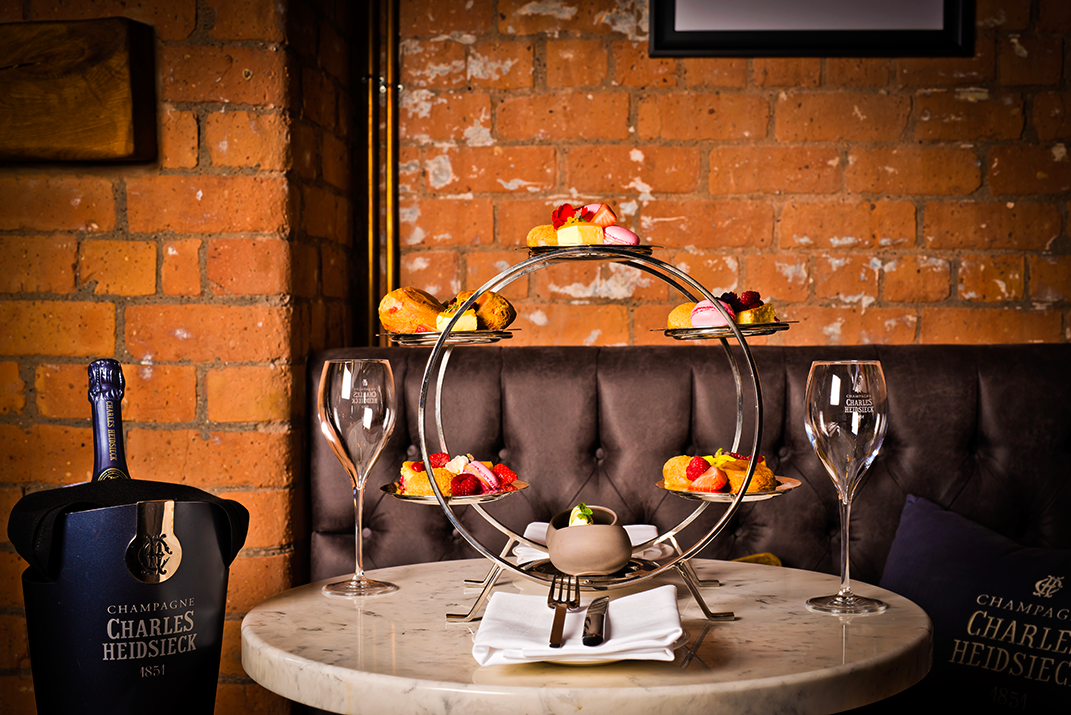 It’s easy to feel nostalgic about the days where we could simply go out for an afternoon tea if you felt like a treat. However, being locked down at home doesn’t mean you can’t make it special. Chef Paul Askew has been making good use of his time at home with all sorts of goodies for him and the family and is now sharing his top tips for a high-end afternoon tea that can be prepared at home.

While the restaurant has closed its doors temporarily following government guidelines, he’s been experimenting with his favourite ingredients, at least the ones he can get hold of. For Chef this is a rare privilege, as he doesn’t often get the time at home to prepare such confections – and here at the restaurant, he trusts that to our pastry chefs.

Although Chef Askew acknowledges the brilliance of the tried and tested family recipes out there, with this quick and trusty guide, you can deliver an afternoon tea with confidence. If it’s your first time, he has the following advice:

“The secret for me is not to overwork the dough, and people get a bit paranoid about how to work scone dough. It’s very much about doing it efficiently and quickly and not overworking the flour.”

While most people will use raisins or pass up the fruit altogether, Chef Askew has a few secret weapons up his sleeve in the form of golden sultanas, cherries and vanilla pods. The vanilla should be placed into the crumb mix as you’re rubbing in the flour.

The scone is the protagonist of any afternoon tea, but that’s not the only sweet to include:

“We’ve been playing around with lemon and lime mini drizzle cakes. We’ve done three or four versions of chocolate brownie, which I think people adore. But also, on an afternoon tea, a fruit tart is always one that I love, with crème pâtissier and raspberries. The thing is, we’re not quite in the raspberry and strawberry season for England at the moment.”

While there are lots of people who would proclaim a sweet tooth, there are equally those who prefer the savoury components to the afternoon tea and can find themselves a little put out if there aren’t plentiful sandwiches to enjoy. Naturally, Chef Askew has got it covered:

“I think from a savoury point of view, a little bit of poached salmon, with dill, cucumber, mayonnaise… possibly a little bit of horseradish in there with the mayonnaise as well, on granary bread or a granary roll.”

Chef Askew wants to support local food purveyors during this challenging time for producers, and he’s particularly keen to get behind the cheese industry who are finding it especially hard. Cheeseboards are not something we’re tucking into in restaurants and hotels at the moment but Chef looks to champion his favourite: Mrs Kirkham’s Lancashire.

You could use it in a cheese scone, or with cheddar as an alternative but if you want something a little less typical, then Chef Askew recommends a miniature rarebit:

“You make a rarebit flour butter, make a roux with the Kirkham’s cheese grated into it, the mature Kirkham’s, which has got a lovely sharp flavour. And then you can always put a little bit of beer and a little bit of Worcester sauce in there just to make it a little bit sharper, or a spoonful of mustard, and then just toast onto some brioche bread.”

If you’re in the mood for an extra challenge, then why not join Chef Paul in the pursuit of breadmaking? He’s recently been adding rosemary from the garden, garlic and oregano to his dough for experimentation while he’s got some extra time. Breadmaking is a past time that’s been keeping him calm while he’s missing the Art School kitchen, in Paul’s words, “the most relaxing place to be!”

If you want to make an afternoon tea worthy of sharing with loved ones, then it’s not going to be done in ten minutes flat, but will certainly be more rewarding than a socially distant trip to the supermarket to buy everything ready-made.

In summary, for Chef Paul Askew’s home-made afternoon tea package, you should:

For a stress-free afternoon tea by the Art School team, you can buy your vouchers in advance from our online shop. Why not have something to look forward to after lockdown?