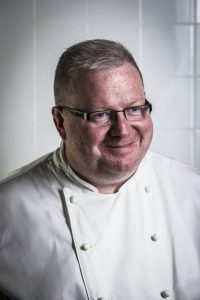 Our very own Chef Patron, Paul Askew, will join 23 other top chefs on series 12 of The Great British Menu. The show returns to BBC Two this spring to celebrate 140 incredible years of the Wimbledon Championships, the oldest and most prestigious grand slam tournament in the world.

This year, as the series celebrates its 500th episode, Oliver Peyton and Matthew Fort are joined in the judging chamber by a new member of the panel, food broadcaster and restaurateur Andi Oliver. Helping them select the winning dishes are a host of guest judges who understand the skill and dedication required to triumph in SW19 including Gordon Reid MBE, current Men’s Wheelchair Champion; Leon Smith, former coach of Andy Murray & Davis Cup Captain; Annabel Croft, previous British No 1 and Wimbledon royalty Sue Barker and Tim Henman.

The competition challenges 24 of the nation’s top chefs to create exceptional dishes fit to serve at this year’s banquet held in the shadow of Centre Court at the All England Lawn Tennis Club. Their creations must celebrate this year’s brief ‘A Taste of Summer’ reflecting the tastes, smells and colours of everybody’s favourite time of year and paying tribute to the incredible history and prestige of the Wimbledon Championships.

The competing chefs include previous banquet winners and ambitious first time competitors all cooking at the top of their game. In each weekly regional heat, three chefs must first battle it out to impress a formidable veteran judge whose identity won’t be revealed until they walk through the door. Holding eight Michelin stars between them the veterans are some of the biggest names in the UK restaurant scene and include Tom Aikens, Angela Hartnett, Michael O’Hare, Daniel Clifford and Nathan Outlaw.

Only two chefs will make it through to the Friday regional final where they’ll need to convince the formidable panel of judges that their dishes deserve a place in the national finals. The series will transmit in the run up to the Wimbledon Championships with the final banquet broadcast on the Friday before the start of this year’s tournament.

Andi Oliver says: “Joining the Great British Menu judging team is so exciting and for the banquet to be hosted at such an iconic British sporting event as Wimbledon is the icing on top. I have been completely overwhelmed by the unbelievable passion and dedication of the chefs on this series and I think the viewers will be too.”

Oliver Peyton says: “The standard of food cooked in this series is insanely high, these are the best chefs in the country cooking the most amazing food you’ll see on television. Sometimes I think the competition will never get any better but the chef’s passion just drives the show on to new heights.”

Matthew Fort says: “It amazes me that each series the standard of cooking continues to rise and this series is no exception. Wimbledon attracts the best tennis players from around the world and the standard is matched by the chefs in this series of Great British Menu.”

Chef will be representing the North West alongside Ellis Barrie from The Marram Grass in Anglesey and Tom Parker from The White Swan, Lancashire.

Tune in to BBC 2 at 7.30pm on Monday 15th May to see Chef Paul Askew in action, flying the culinary flag for the North West region.