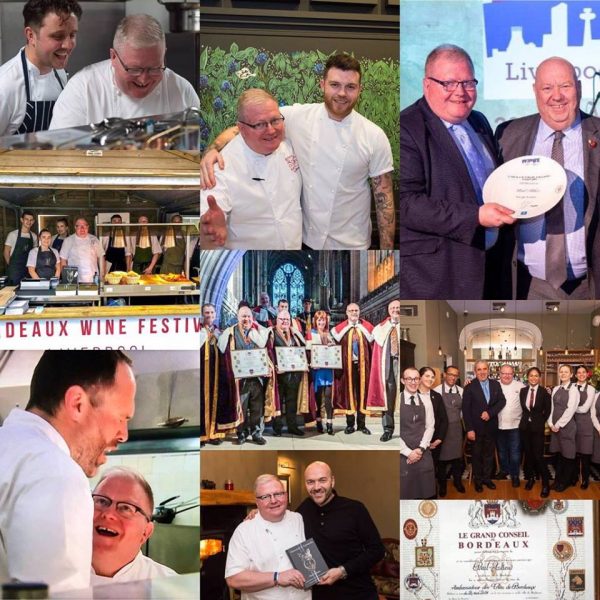 “2018 has been the most significant year to date for The Art School’s development, and indeed the city in general continues to grow. For us, it’s wonderful to see our private dining space, The Moriarty Room in full flow. Having opened last New Year’s Eve at the stroke of midnight, this Christmas has seen an event in there nearly every day with people enjoying the space. The bonus of the extra kitchen and our new pastry kitchen working so well has been a very satisfying thing.

“The Art School Cellars has become part of the Liverpool drinking scene. People are not only enjoying the space for pre and post dinner drinking but also for Afternoon Tea and The Georgian Gin Club -which has seen four successes to date. The Gin Club gives us the opportunity to work with great local suppliers, the January session sees us working with Ginsmiths of Liverpool, part of Higson’s brewery and distillery. That’s on the 8th January and is nearly fully booked.

“The Cellars’ Tasting Room is coming into its own. We already have bookings in January for people who want to continue that little gastronomic journey so I’m excited about that because that room is now starting to be what I’d always hoped it would be. It’s always a worry when you do these things as you’re not sure if people are going to embrace it, just because I think something is suitable does not mean it will be for everybody. However, the ones who have tried it tend to come back and are telling their friends so that is building its own following.

“It’s lovely to see the restaurant come into its fifth year. I’ve just introduced some new designer cutlery and crockery, upgrading everything that little but still with the vision of the journey that I want to take it on during its fifth year. I think it is a significant year for a business in terms of its growth. This year for me is about polishing and refining and making it efficient but most importantly, continuing the gastronomic journey. You’ll see in the new menus and dishes coming that there are going to be some significant upgrades in our approach, without losing the style that we’ve had before.

“If you look at the city in general, the biggest highlight from a gastronomic perspective has to The Bordeaux Wine Festival. 5000 guests came through the tutorials, tasted our food, did the wine matching, experienced the music and an amazing time. Not to mention The Tall Ships and the River Festival. It was great news to hear the festival is returning on the 31st May – 2nd June 2019. The festival was recognised at the 15th annual National Outdoor Events Association Awards with the award for Best New Event 2018.

“More great news is that we have managed to secure the UK Sommelier Challenge, a national Sommelier competition that will be held at the Bordeaux Wine Festival sponsored by Bordeaux. We’ll also be doing celebrity chef demonstrations to match the food to the wine, so we will be heavily involved in curating that process.

“Obviously, it was a great honour for me to become an Ambassador for the order of Le Grand Conseil des Vins de Bordeaux which was very humbling. I shall continue to bang the drum for all things food and wine in this city and hopefully Bordeaux as well when we get the chance to go across.

“Another highlight of the year for me was welcoming my Great British Menu friends, Ellis Barrie and Tom Brown, to the restaurant for a spot of collaborative cookery. Both events proved highly successful and it was great for me and the team to experience their ideas and style of cooking, and of course for our guests to sample it.

“Not just on a personal note but for the restaurant and the city as well, it is great to get the chance to go and do Sunday Brunch and Celebrity MasterChef Semi-Final as a mentor and a judge; rather than as a competitor like previous years on other programmes. It shows the style of what we do at the restaurant, the way we mentor and train people and get them through their formative years and show that Liverpool is on that gastronomic map. If the Bordeaux Wine Festival does not demonstrate that, after outperforming Quebec and Brussels in year one, I don’t know what other proof I need.

“It’s a vindication of what I’ve been saying from day one. If you create the right atmosphere, the right level of service matched by the food and the drink, you can be in any city in the world, but it must come from the heart. It must be delivered with a little bit of style and love and care. I think if you do that, which this city is renowned for, the hospitality levels of Liverpool and the surrounding areas are legendary; what better city could you possibly have for a festival?

“I’m excited about the next few years. I think that 2019 will see continued growth with amazing things going on. As the Bordeaux Wine Festival comes every two years, in the gap year we will host a Seafood and Champagne Festival or a Guinness and Oysters Festival. There will always be something extra now. Obviously, the Liverpool Food and Drink Festival in Sefton Park is firmly established but we need to start populating the rest of the year with food and drink activities.

“I am going to be doing some new work with Granada Television in the coming year and Channel 4 so there are some great things coming up. I’m looking forward to working with Sauce Communications, I’ve been in talks with them for some time but now all the new developments in the restaurant are done and dusted, I feel like I can move onto the next stage and start working on a national level.

“The most important thing that I’d like to say is a thank you to all our guests, supporters, suppliers, our followers on Facebook, Twitter and Instagram. Thank you for all your support, have an amazing Christmas and a healthy, wealthy and happy new year in 2019. Regardless of politics, religion or any other difference we may have, always save time for a little bit of gastronomy in your life as it’s good for the soul.” Chef Patron, Paul Askew